A General Body Meeting of Association of Petroleum Geologists-Kolkata Chapter was held on 22.08.2007 at RCC, Kolkata to discuss the following agenda:

Statement of account was presented by Dr. A. K. Nandi, Former Treasurer of the association. This was followed by election of the new executive body, Kolkata Chapter which is as under:

The house discussed various aspects and suggested/shared their views for the expansion and improvement of the association's activity. 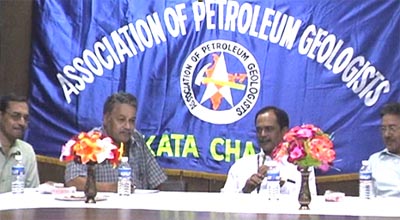 Mr. R. M. Barua, the newly elected President has suggested for the membership drive and shown keen interest on arranging lectures. Mr K. S. Pangtey, the Vice President desired for exposures of field excursion, where the individuals can be benefited by organizing such kind of activities. Mr. S. Brahma advised that the lectures can be arranged in three different ways: 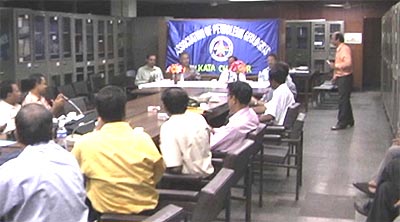 A still from the meeting

Shri A K Biswas, Basin Manager - MBA suggested to explore the possibility of technical lectures with present advancement in interpretation like "AVO analysis and Seismic Inversion". Besides, he suggested the topic like Exploration Management to be arranged from outside agency. Finally, the Basin Manager conveyed best wishes to all the newly elected members of the APG-Kolkata Chapter.